If you’re a musician or a fan of music at all, you know one of the worst things ever is having your gear stolen. Not only is music gear expensive to replace but a lot of musicians develop a special bond with their gear, finetuning it to no end to get that perfect sound.

My friend Graham Madden (of Vancouver, B.C. band Tough Lovers) is missing his pedalboard. It was last seen after their most recent show Nov. 17 at the Media Club. The band took a two-week break before their next practice and that was when they discovered the pedalboard was missing. It had been loaded into the car following the show but seems like it never made it back to the band’s apartment where the rest of the gear was unloaded. It’s uncertain where or when it would’ve been lost in the mix or if it was lifted from the car during load-out.

If you happen to hear of anything or come across something that sounds similar to this on Craigslist or from other folks, please contact him on Twitter at @g_madden or by email. You can also leave a comment on this post. Thanks.

Here’s his message that was posted to Facebook:
“Musician friends: My pedalboard was stolen.
If you have any info on the contents, please let me know ASAP.
The pedals from right to left are:
-Boss TU-2 Tuner
-Jetter Dual Overdrive
-Boss OS-2 Overdrive/Distortion
-Boss DD-3 Delay
-Boss FL-3 Flanger
The pedal board was covered in recognizable burgundy fabric surrounding the pedals.
If you see it anywhere, please let me know.” 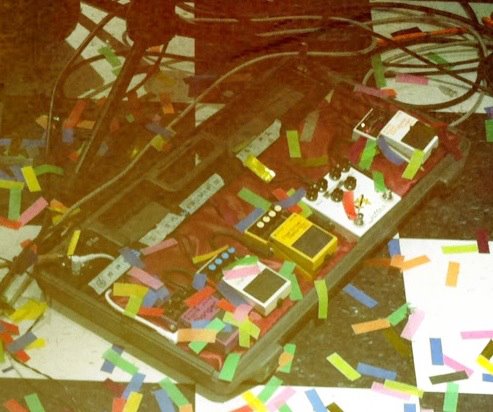