If you’ve been following my blog for awhile, you know I’ve been a longtime fan of Foster the People. I’ve dedicated a couple posts to them over the last year or so and will likely continue writing about them in the future. They’re a quirky band with an interesting style, one I hadn’t seen in a long time. If you’re unfamiliar with this band, then you need to get out from the rock you’ve been living in and introduce yourself to them quickly.

Their new music video for “Houdini” emits the same kind of quirky humour last seen in “Don’t Stop (Color on the Walls)” and “Call It What You Want.” There’s a lot of artists who aim for a ‘quirk’ but when it comes to Foster the People, I feel like there’s always an underlying commentary, something subtle but snarky that they’re trying to say.

The “Houdini” video starts by showing the band members on set of a new music video – turning the focus on the process itself. Only seconds into the clip, a lighting rig crashes down on the set and all three band members are killed – but only in the storyline, of course. While the video crew freaks over the band’s concert the next day and wonder, ‘What the hell are we to do?!’, a secret crew led by a wise-looking Mr. Miyagi-style character receives the call. Instantly, they appear on set, like some secret department of the FBI, and get to work ‘re-animating” the three corpses. 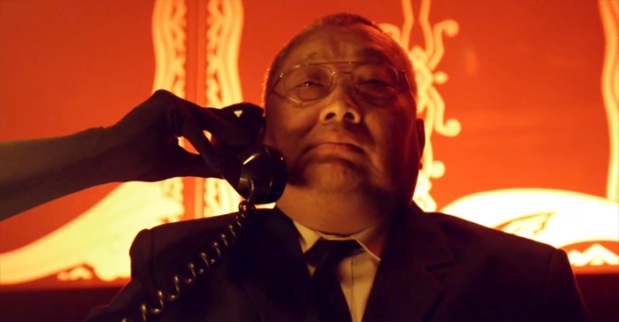 Agents in black body suits begin puppeteering the band members against a black backdrop, positioning them at their instruments, arms flailin’ and feet stompin’. The crew quickly realizes there may be a way to save the show after all instead of having to cancel and refund all those tickets – phew! They get to work filming the band’s new music video and on-set hijinks ensue (including a hilariously staged scene where a band member is bent over suggestively in front of an agent, busy taking a snack break).

The agents also get creative and even hoist the band members into the air, giving the impression of anti-gravity as their instruments ‘explode’ into the air and then reassemble. Though the crew is already impressed, the agents go another step further and even kick in some fancy footwork. The guys are suddenly swapped into white outfits, reminiscent of the Backstreet Boys’ video for “I Want It That Way (Tell Me Why)”.

Suddenly, it’s the next day, the crowd is packed, the girls are screaming, the concert experience is shiny and flashy – but let’s be real. When was the last time you were at a concert that exciting? How about never? Yeah, I didn’t think so. The band appears on stage, dressed all in white and the music video scenario is then performed live on stage. The audience is none the wiser that the band is actually dead and that they’re being reanimated by puppeteers! Ack!

However, the concert is a success, the crew is ecstatic and one hell of an after party swings in action. The band doesn’t miss a single beat but of course, being the dead corpses that they are, they’re left slumped – and likely rotting – on a couch in the green room as everyone else enjoys congratulatory high-fives all around. Confetti!

When I was in elementary school, we did a Halloween poster project that featured scenes of a graveyard, complete with tombstones. On one, I wrote ‘STEPHANIE IP’ and then put my birth year and the present year. My teacher left it on the wall with all the other posters but when Halloween passed, I collected the poster and brought it home to show my parents. I remember so clearly what my mom said when she saw my tombstone: “Well, that’s messed up. Are you telling me you’re going to die in the next two months?”

As a kid, I thought nothing of it but there is definitely something morbid about dating your own death, even as a joke on a Halloween craft project. That’s why I thought it so peculiar that Foster the People would enact a version of their own deaths in “Houdini.” Sure, some people are superstitious and some aren’t – but I wouldn’t want to tempt the fates either way. Foster, however, are able to find hilarity and a sense of lightness in joking about the afterlife.

The video also brought up some interesting points about the role of a ‘star.’ What’s the value of a rock star? Who’s qualified for the job?

In “Houdini,” it’s almost as if Foster the People are downplaying their own success. Anyone could do this. Anyone can orchestrate this level of success, they seem to be saying. The rock star lifestyle is so easy, you could do it with your eyes closed! Heck, you could even use a puppet and still create the same image! Whether you can extrapolate that into commentary on the role of record labels in the creation of an artist… well. That depends whether you think record labels are big, horrible monsters or a legitimate part of how the music industry works.

The music video – that is, the one being filmed within the video – and the concert went off without a hitch, even when its star players were down and out for the count. It could be interpreted as drawing a spotlight on all the aspects that go into a successful band. Or it might be interpreted as illustrating how mindless being a pop star these days can be – just sing some songs, have the right image and the rest will show up on a silver platter.

You can draw your own conclusions about what Foster the People meant to say with the video but if you take a look at the lyrics of “Houdini,” there’s a loose explanation.

Got shackles on, my words are tied,
Fear can make you compromise,
Fasten up, it’s time to hide,
Sometimes I wanna disappear.

Much of the lyrics focus on the narrator’s “ability” and feelings of adequacy. It appears the narrator is constrained by some unknown figure’s expectations and challenges – you could use the context of a relationship or if you want to tie it more closely to the video, the context of pop culture and what it expects from its artists. The expectations are so tough that the narrator just wishes he could evaporate like Houdini, and constantly tries to tell himself “it’s up to your ability.”

In a way, the song and video is a white flag of surrender. It’s the idea that, yes, even wildly successful people still face expectations that they don’t always feel like they can measure up to, expectations that are tough to meet. When things get that difficult, the natural instinct is often to run in the other direction, to wish that you could just “disappear,” to remove yourself from the equation and hope that things will continue on.